From Lane One: The Best Track & Field-Inspired Halloween Costumes, By Matt Wisner for RunBlogRun

From Lane One, #8: #FreeGarrett, A few swear words…

From Lane One, #6: Yared Nuguse Can Do Whatever He…

Halloween is by far my favorite holiday. Most holidays seem to prioritize tradition and pleasantries over a singular pursuit of good hedonistic fun, and while I’m sometimes charmed by ceremony, the best holidays are the ones that can’t be ruined by uncomfortable dinner conversation or the impulse to entertain distant relatives. I’m convinced that Halloween is the only holiday that does that every time.

That said, I have a contempt for bad costumes. Growing up, my friends were the type of people to take their costumes very seriously–the kind of people who celebrate the Rocky Horror Picture Show and wouldn’t let October pass without going to a haunted house or corn maze, anything to elevate the heart rate, anything to feel sincerely scared. In creating their costumes, they’d generally err on the side of extravagant but obscure rather than recognizable but boring. Because what you wear on Halloween definitely says something about you. It may be a direct reflection of your personality, or your interests.

This year, some of my friends were lifeguards: tank tops, sunglasses, not much else. Yawn. One was a referee despite being a referee last year too. Snoozefest. Plaid shirt and jeans is barely a cowboy. All black is not a ninja. Hot is not a costume. Maybe I’m a purist.

But someplace, somewhere, good costumes prevailed. I was on Twitter, and I saw a photo of a toddler dressed as Sha’Carri Richardson, and I was inspired to create a collection of some of the best Halloween costumes inspired by our favorite track and field athletes. 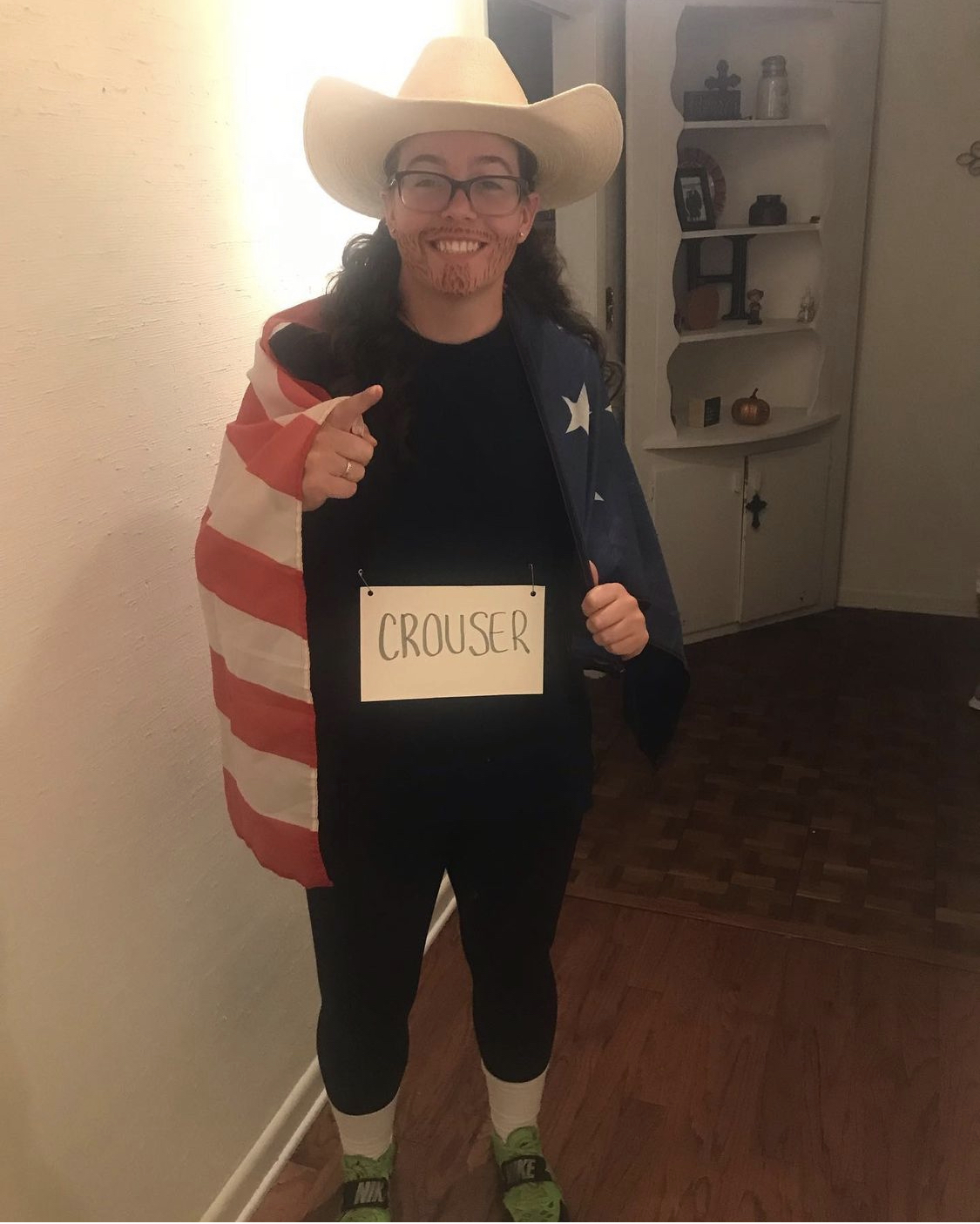 This costume works so well because of the cowboy hat and markered-on beard. Crouser went to Texas for college, and I guess that’s where the cowboy hat comes from; he put it on for the photos after he won gold in Rio, and I’d bet that’s the moment that inspired this costume. I’d be really impressed if she wore the throwing shoes to school. 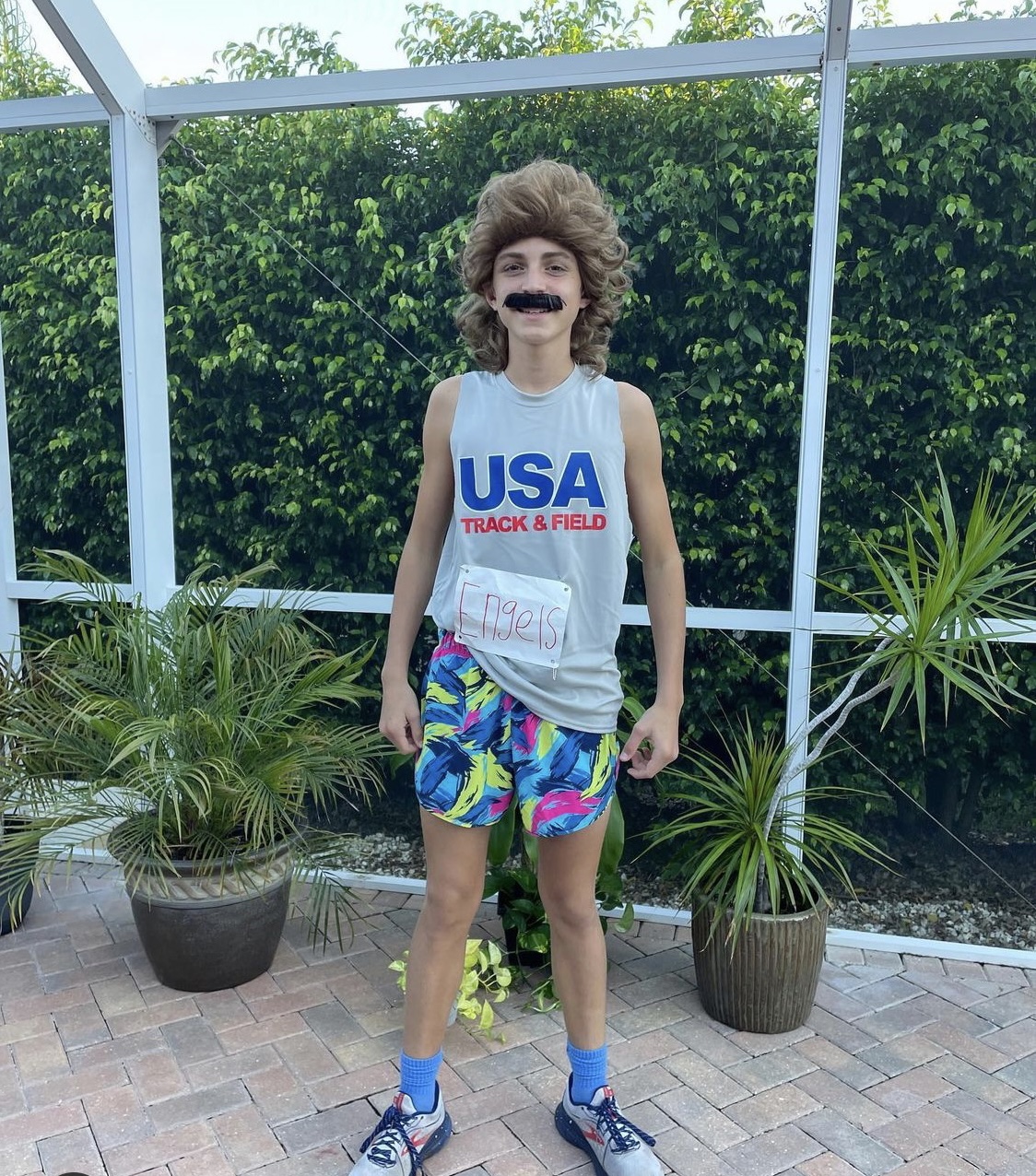 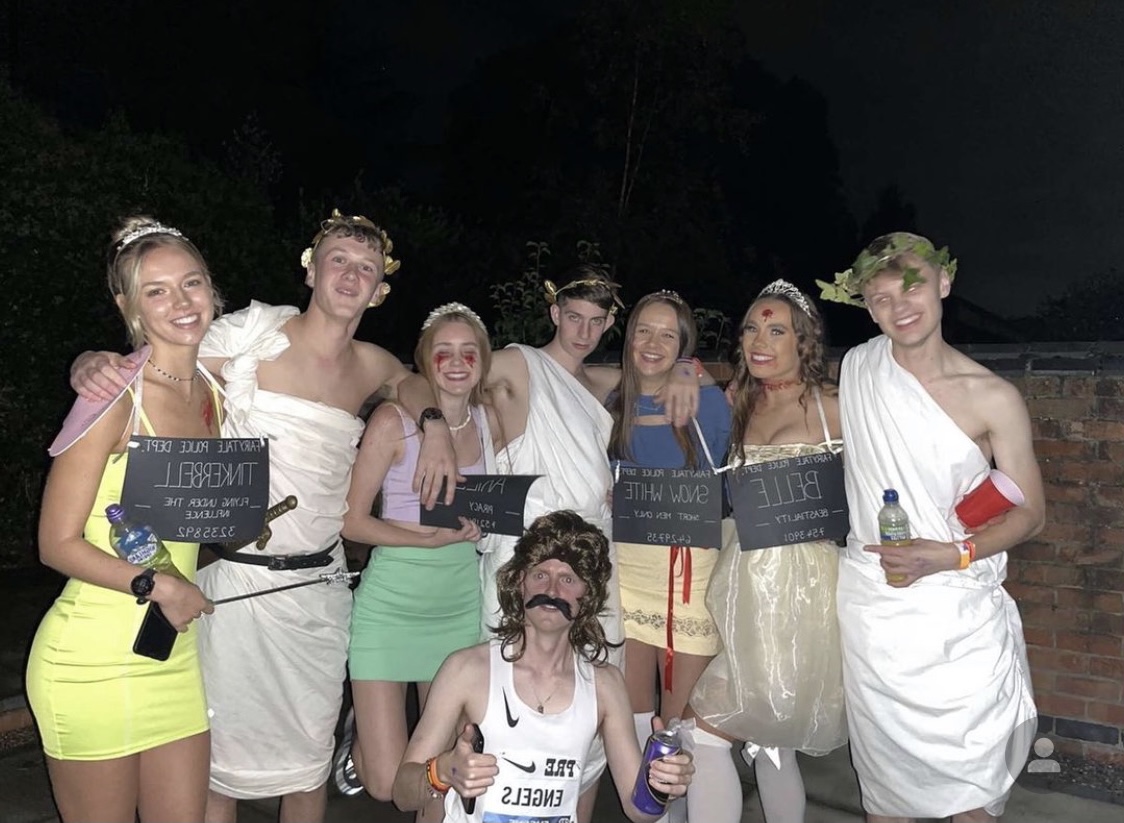 These boys killed the mullets. The first Engels imposter loses points for the shape of his mustache (needs a little more curvature) and for wearing Brooks trainers, but I’m charmed by the homemade race bib. The second Craig scores extra points for the beer in hand, a gesture to Engels’s famous party-boy image, having multiple times shotgunned a beer at the finish line. Another thing: Does he have Engels’s real race bib from this year’s Pre Classic? If not, he did a fantastic job recreating it. 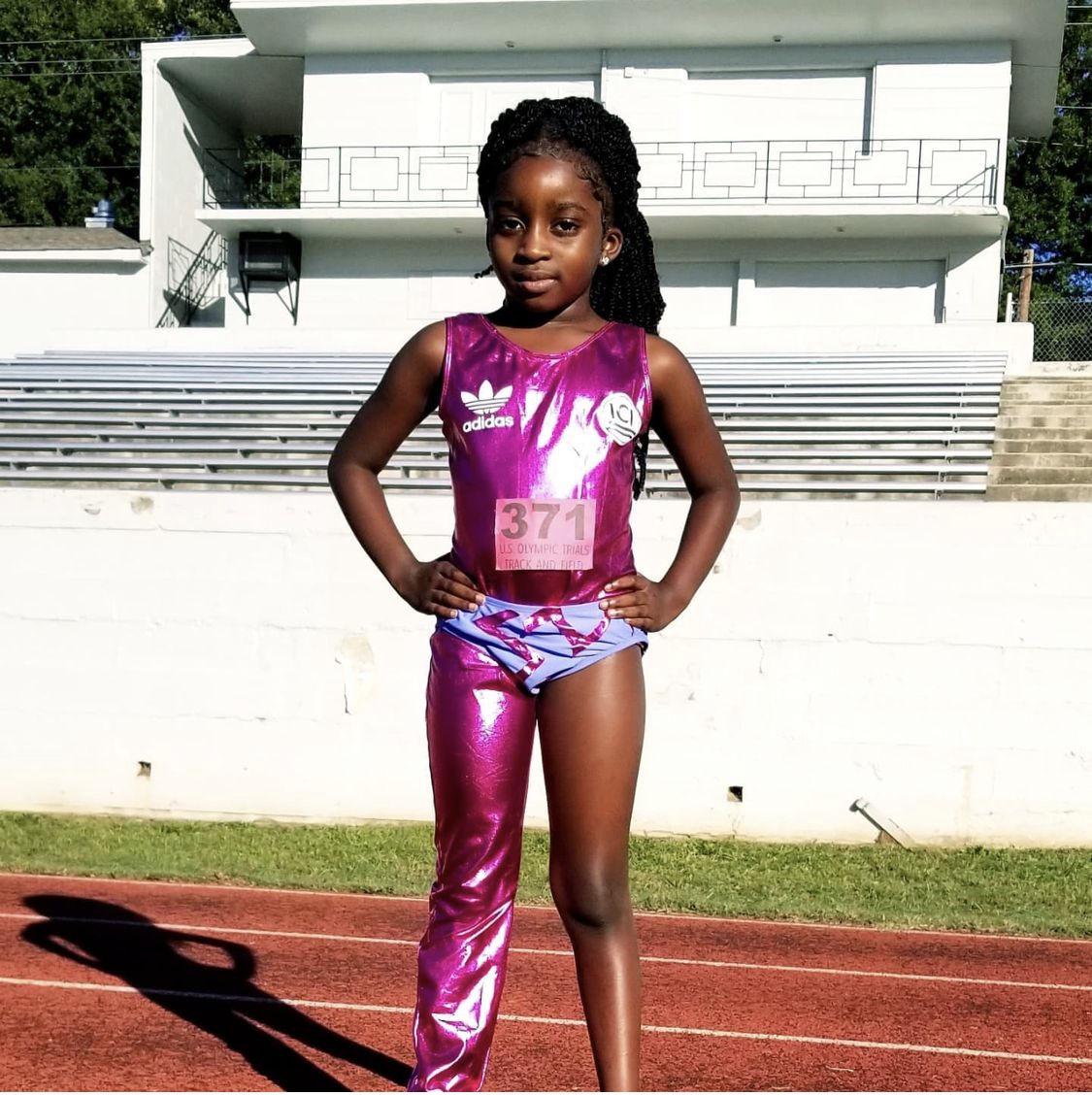 
Somebody dressed their kid as FloJo. Of course it was going to happen; FloJo probably has the most iconic look of all American track athletes in history. Although she died in 1998, her flashy style and recognizable image lives on over two decades later. The shiny, radiant pink one-leg pant really makes the costume. 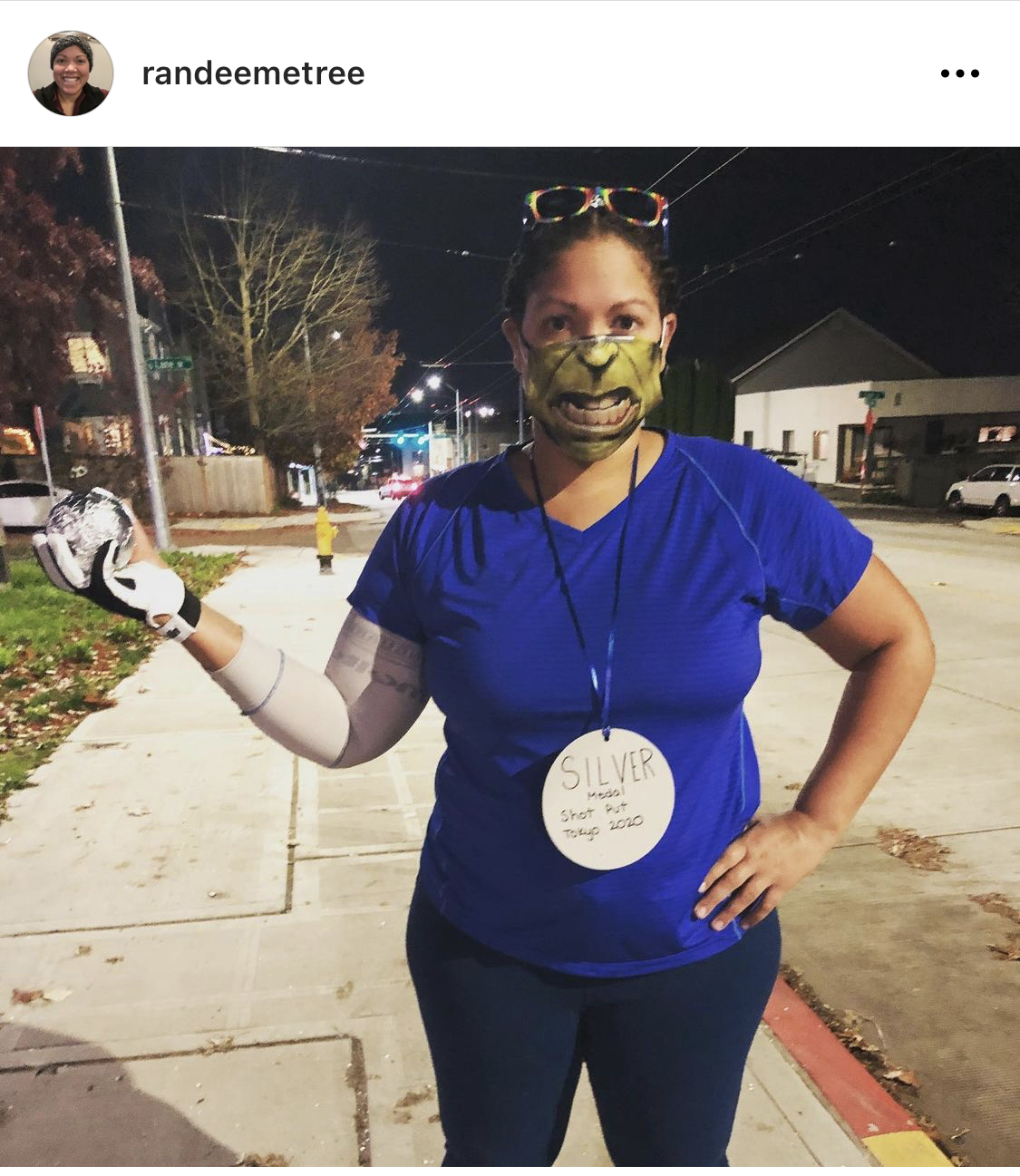 I guess the pandemic made this fan’s job easier: I’m still not sure whether she’s wearing a Hulk mask or a Grinch mask, but it works either way–she’s successfully recreated Raven THE HULK Saunders’s most defining feature. I love the implement made of aluminum foil enough to pretend to ignore the homemade silver medal hanging around her neck by a ribbon. 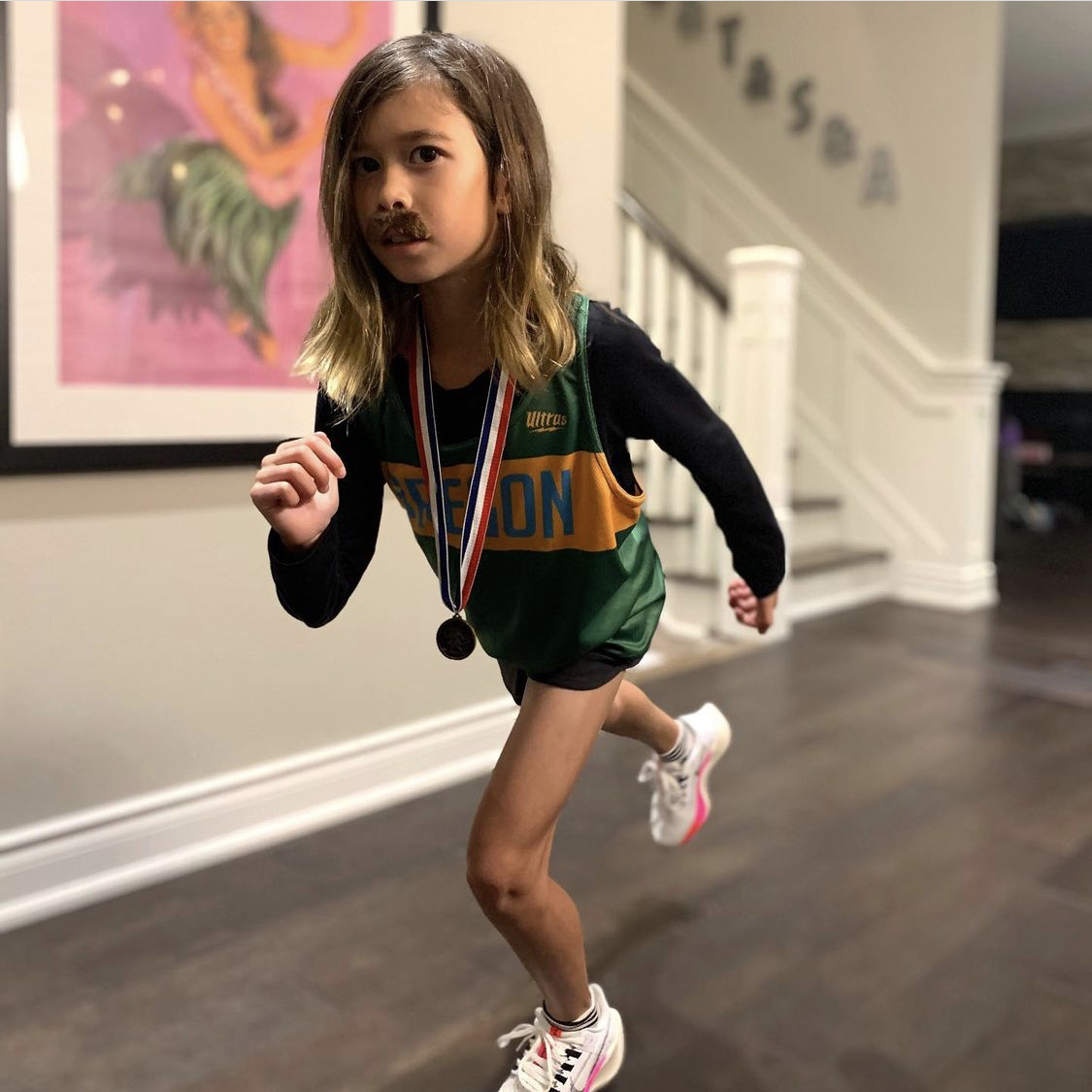 This Pre costume checks all the boxes: long hair, mustache, Oregon singlet. This kid told the other trick-or-treaters, “You may beat me to doorbell, but you’re going to have to bleed to do it.” 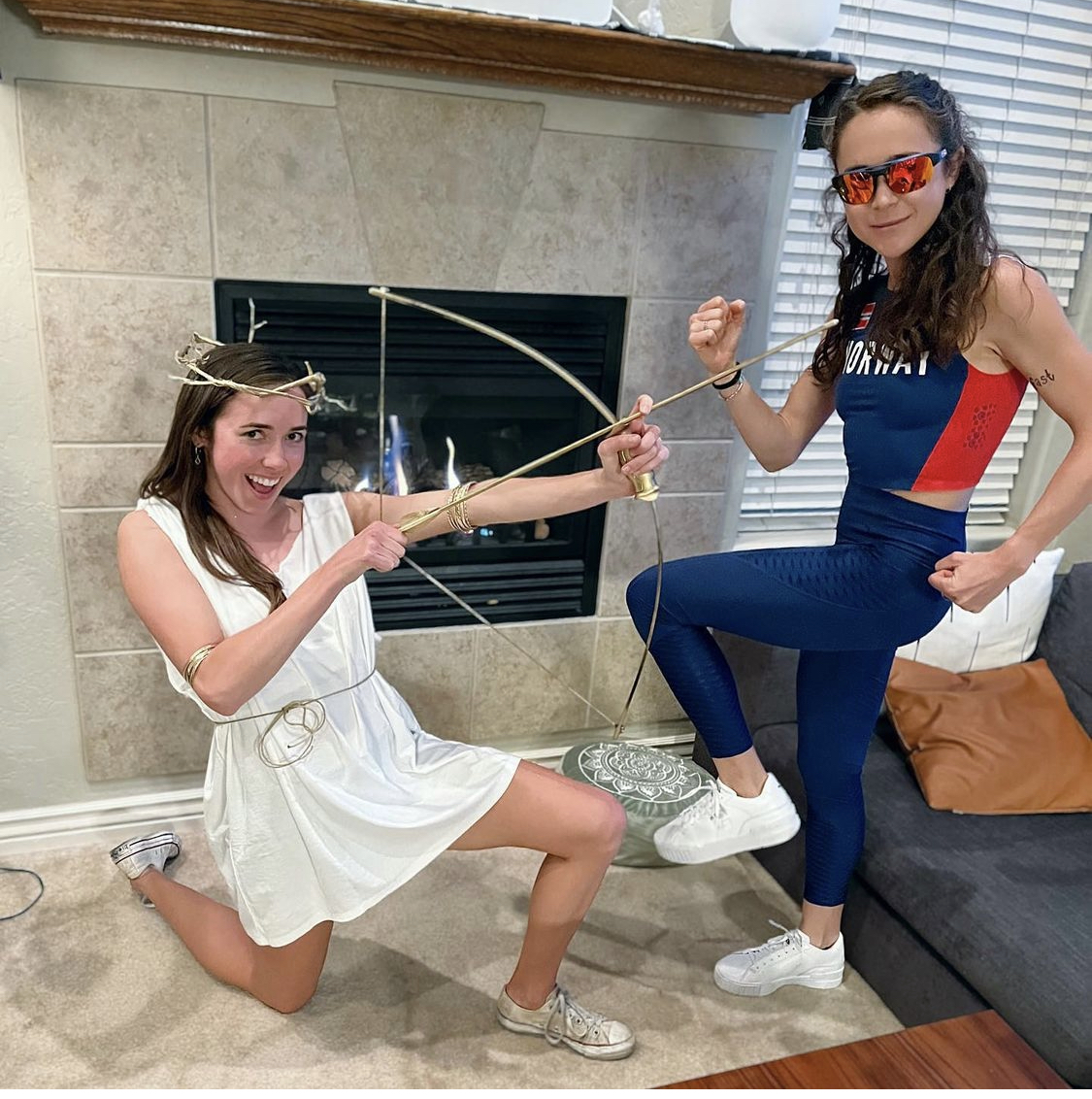 The marathon queen Molly Seidel wins extra points for being the only world-class runner to dress up as another world-class runner. I’m not sure where she got the Norway kit, but she rocks it. The sunglasses feel more like Henrik than Jakob, but I’ll let that slide. Molly even penned Jakob’s <<fast>> tattoo to her left arm, and she even emulated the typewriter font pretty well. Is Molly the next member of Team Ingebrigtsen? I heard Ingrid might need a speedy training partner in a couple years. 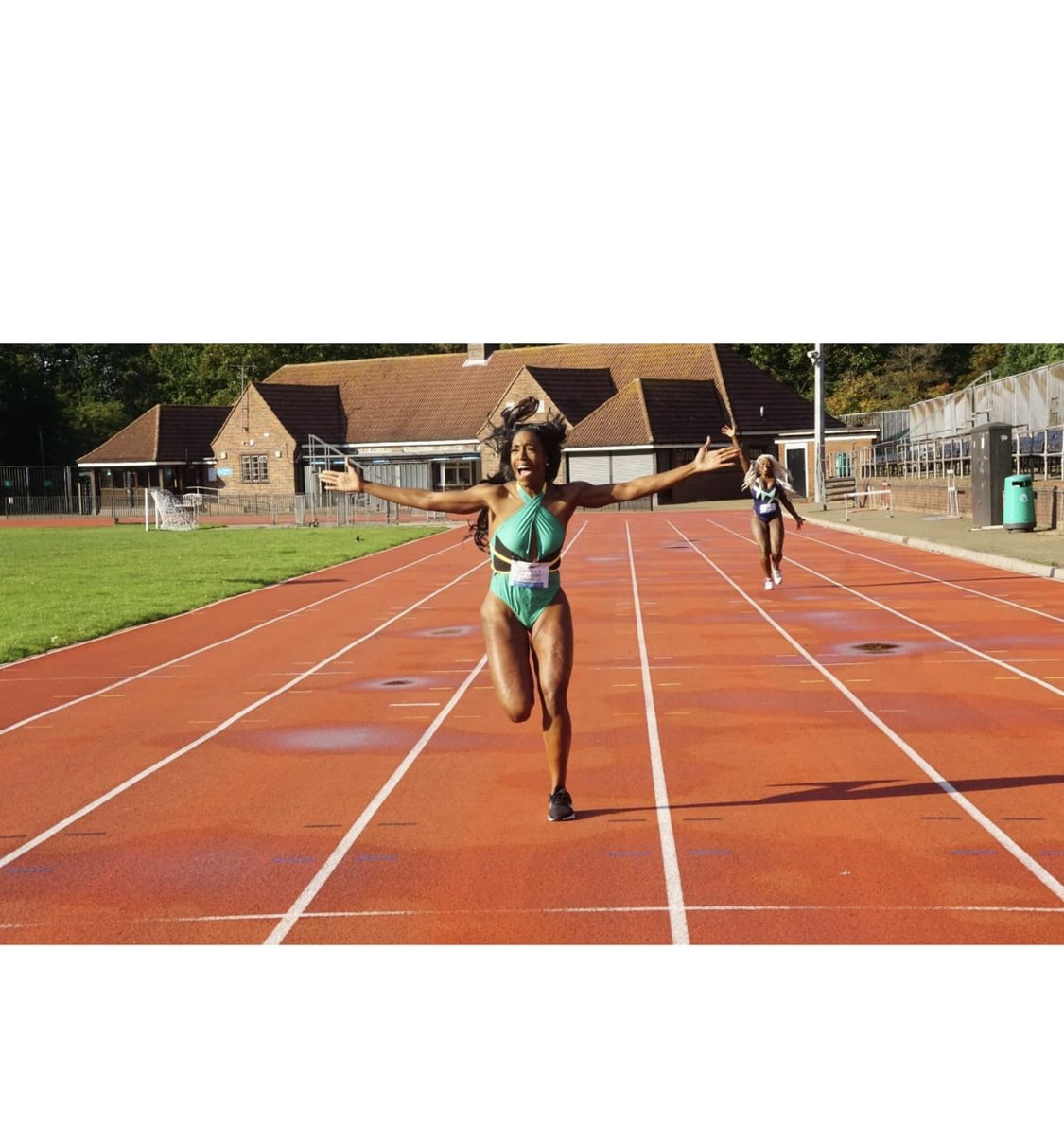 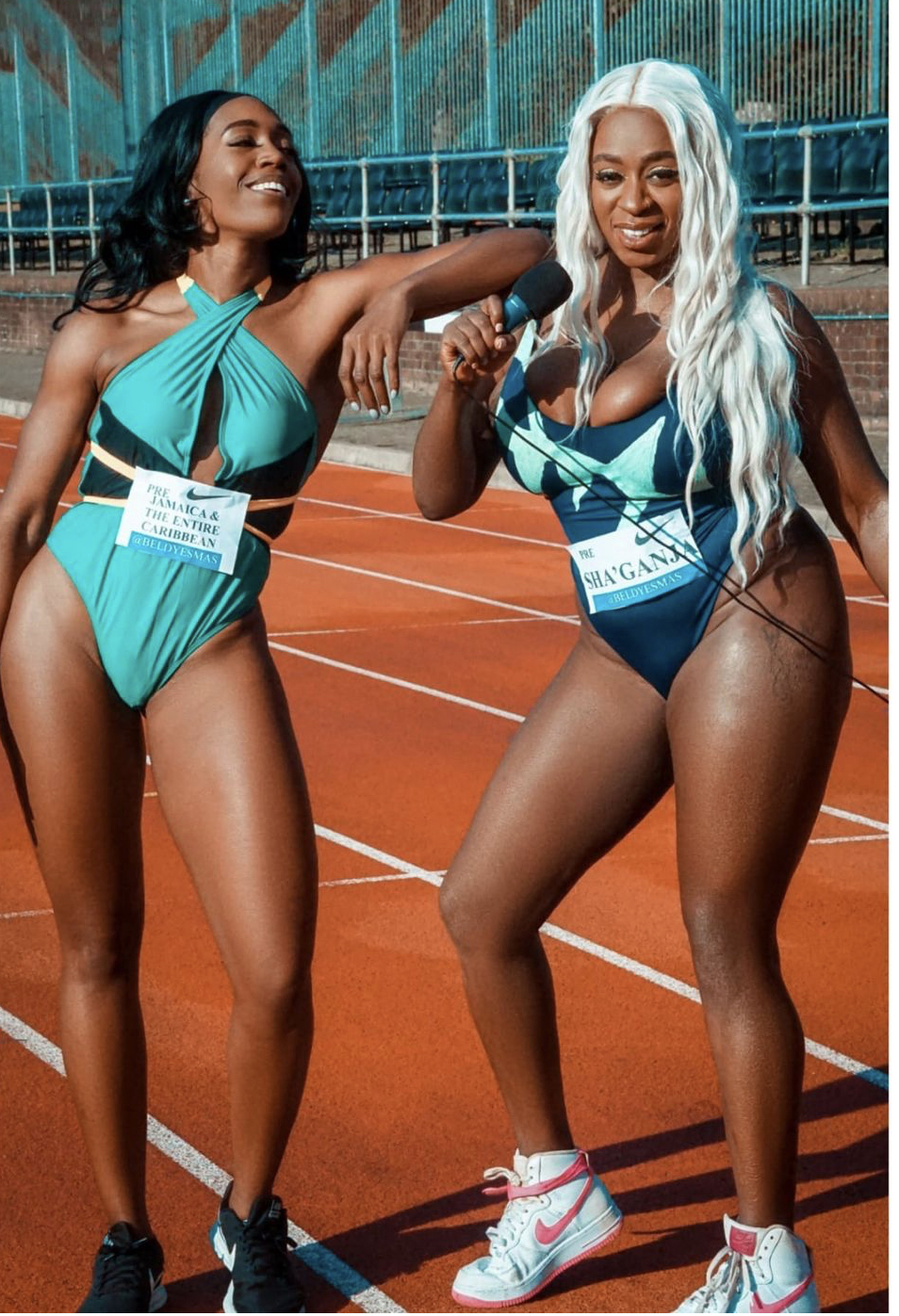 A bunch of people dressed up as Sha’Carri Richardson–probably because her look is so discernible. Many athletes just wear their standard racing kit, but Sha’Carri always has some flair. These ladies win Halloween. In these photos, they seem to be friends, which certainly wasn’t the case after a Pre Classic that ended in a gold medal for one and a last-place finish for the other. Somehow, these two managed the extravagance and accuracy while still looking good; a lot of times, you have to choose one or the other. The uniforms look like they could be real. They’re both wearing Nikes. The mic is where it belongs: in Sha’Carri’s hands. Everything fits. I just wonder whether–in true Sha’Carri fashion–the hair color changed later in the day.

From Lane One, #8: #FreeGarrett, A few swear words caused a frivolous DQ at the…

From Lane One, #6: Yared Nuguse Can Do Whatever He Wants, by Matt Wisner, for…

Cops Are On Trial After Torturing, Killing Man